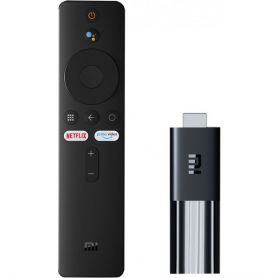 Xiaomi Mi TV Stick is a miniature device allowing you to add Smart TV functionality to any TV or monitor equipped with HDMI connection. After connecting and simple configuration we get access to resources of such streaming services as Netflix, Amazon Video or YouTube. Having an Android smartphone you have the ability to transfer media such as photos from the gallery, videos or songs from Spotify to the Mi TV Stick using Google Chromecast.

By activating the built-in microphone in the remote control you can use Google Assistant to search for content and control the new Mi TV Stick. Pre-installed Google Play application store provides access to many streaming applications such as Netflix, Amazon Prime or Spotify. There is also something for lovers of games compatible with system Android TV..

In addition to the basic buttons to control Xiaomi Mi TV Stick, there are two convenient quick start buttons for Netflix and Amazon Prime streaming applications.

At less than 30g the TV stick weighs no more than a cherry tomato and is small enough to easily fit in your pocket. Forget about cables, plug the stick into any TV, monitor or projector with an HDMI port to turn it into a smart TV!