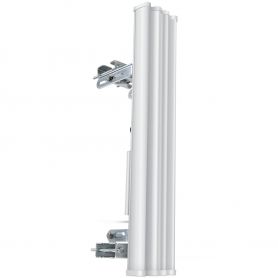 In a more complex network, users rely on a base station, which controls the rest of the technologies found within the network. It is the one that unites all the components toward the central hub, which makes monitoring and modification of the settings, among others, much easier to deal with by the administrator. Nevertheless, even the base station requires a good support, especially for the transmission, relay, or transfer of wireless data. The Sector AirMax 5G20-90 fulfills the need through its very high gain and compatibility with the 5GHz frequency.

The Sector AirMax 5G2090 works on the 5GHz frequency, which provides for less interrupted source of Internet connectivity. Though the 2.4GHz offers a wider range because of its low frequency, a lot of devices operate within this area such as microwave ovens and even openers of garage doors. This then makes such frequency often noisier than the 5GHz. When it comes to data transmission, 5GHz is more consistent and reliable.

The device allows for better broadcast among those that make up the network. The 2x2 MIMO technology, moreover, simply means that there’s a boost in throughput equal to twice that is being provided by 1x1 MIMO (sometimes known as MISO).

The Sector AirMax 5G2090 has a very high cross-pol isolation of up to 28dB and a gain that galls between 19.4 and 20.3 dBi. Even when the signal comes from a very far area, much of the Internet quality is preserved once it arrives into the base station. The sector antenna has elevation beam width of 4 degrees and electrical down tilt of 2 degrees. It also has an Hpol beam of 91 degrees and Vpol beamwidth of 85 degrees.

The sector antenna is easily complemented with Rocket M5 complete with RF jumpers and brackets.

Ubiquiti LTU Rocket
AP PtMP 5GHz, RF Module Paired with AirMax Sector&Omni Antennas, Up to 64 Client Connections, Up to 2+ MPPS Performance, Max Throughput 675.84 Mbps
From
$ 347.94
Product review
Penn Gutierrez-jones
Nice antenna for a low price. Delivered in time and good condition. Nice place to buy good stuff.
Javier Golovchenko
Good device for that price. Not easy to mount and install, but nice you did it, you get awesome straight of signal.
ALL PRICES EXCLUDING VAT