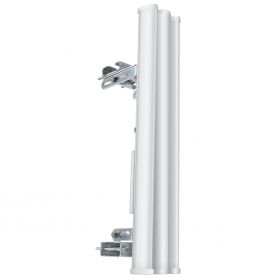 The various Rocket M devices that have been designed by Ubiquiti Network are already awesome in their own right. They are well-known for their extensive coverage, superior performance, and high-def networking capabilities. However, they sometimes need a boost especially when you want to cover longer distances or more buildings, devices, and users. The Sector AirMax 5G19-120 antenna does that work. It’s developed to work specifically with Rocket M5 base stations so installing it isn’t a problem. Tools such as mating brackets are already included, and the setup doesn’t require any other special equipment or skill.

Excellent Performance for an Antenna

The Sector Airmax 5G19-120 antenna has an excellent gain of around 18 to 19 dBi, which then allows you to make a broadcast or a transmission signal over longer distances. It also boasts of a dual-linear polarization scheme, so regardless of what the orientation is, you can still get a good pickup. The beam width for both of these polarizations is 123 degrees while the elevation beam width is 4 degrees. The recommended electrical down tilt is 2 degrees. It also has a good score for cross-polarization, which is 28dB min.

Besides using MIMO technology, so it provides a clearer and faster transmission, the antenna also relies on AirMax, which is a revolutionary concept from Ubiquiti Network. With it users can have more say when it comes to the bandwidth and its allocation, further maximizing the throughput and reducing latency, noise, or interference.

The sector antenna is of carrier-grade level, which means it’s not only reliable but it’s also very durable because of its industrial-grade build. It has a very high wind loading rate at 160 miles per hour. The RF jumpers included in the packages are weather proof. The antenna is definitely meant for the outdoors and has the capacity to beat the different environmental conditions, even the harsh ones.

Ubiquiti LTU Rocket
AP PtMP 5GHz, RF Module Paired with AirMax Sector&Omni Antennas, Up to 64 Client Connections, Up to 2+ MPPS Performance, Max Throughput 675.84 Mbps
From
$ 347.94
Product review
Axel Coutouhas
Great device. Easy to setup and mount, awesome range and power! Highly recommended for all.
Kelwin Brennan
Pure power of signal anywhere you want for THAT low price! I am happy with this one.
ALL PRICES EXCLUDING VAT