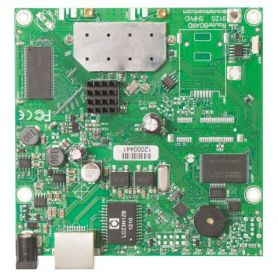 The RouterBoard 911G-2HPnD is a fully functional integrated wireless router with components that are comparable to some of its strongest competitors. It operates using an Atheros CPU with MIPS-BE architecture as well as a clock speed of 600MHz. It also connects via a single LAN port that is Gigabit, ensuring that the transfer of large data files remains fast, efficient, and reliable. It is compatible with the recent and common wireless standards 802.11b/g/n with 32MB RAM. It also has an auto MDI/X technology, which speeds up the configuration process by allowing the router itself to immediately detect the kind of cable you are using. It also runs on 2.4GHz frequency, which is now commonly used.

The wireless router runs with the RouterOS L3, which offers unlimited EoIP tunnels. It also has 200 PPPoE, L2TP, PPoE tunnels, as well as unlimited VLAN interfaces. It guarantees 1 slot for hotspot active user and offers good protection with RADIUS client for proper authentication of logins. Queues are unlimited and provides a web proxy. There are also 10 spaces for user manager active sessions. The operating system can be upgraded to version 6.x, which then gives you up to 30 days of initial configuration support and turns the router into a wireless access point and bridge. Tunnel support also becomes unlimited.

If you want to deal with fewer cables or wires, you can make use of the power over Ethernet, so the needed power output is delivered through the same cable or wire. This is also one of the best ways to maximize your electrical power. It also operates with ESD surge protector in order to avoid the sudden increase of electricity that may cause a huge damage to the critical components, rendering irreparable damage to the wireless router.