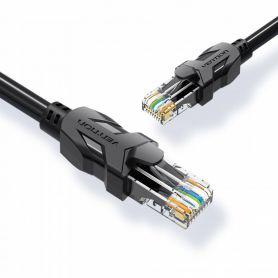 Vention CAT6 Patch Cord is used in network applications such as 10Base-T, 100Base-T, 1000Base-T Ethernet, and have been designed specifically for Gigabit Ethernet applications (Gigabit over copper). They perform at high-data transfer rates. These cables deliver improved performance over standard CAT5E cables.

Used to connect your network card to any of the following:

Patch cords have stranded copper conductors for flexibility - great for frequent changes that occur at the wall outlet or patch panel.