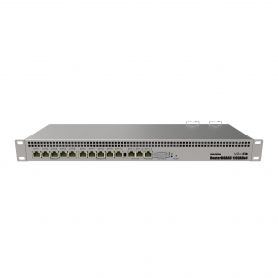 The RouterBoard 1100AHx4 is a 13-port Gigabit router with its own rackmount case for easy integration into an existing network, microSD slot for portable storage.

New RB1100AHx4 Dude Edition has Annapurna Alpine AL21400 CPU with four Cortex A15 cores clocked at 1.4GHz each, for a maximum throughput of up to 7.5Gbps. The device supports IPsec hardware acceleration and is faster at it than any previous RouterBOARD device (up to 2.2Gbps with AES128).

The RouterBoard 1100AHx4 doesn’t have a miniPCI slot but a single microSD slot for the memory card, which is now often used in plenty of portable devices such as mobile phones and certain cameras. This makes the transfer and sharing of files more efficient and quick. It is also compatible to some devices that work with power over Ethernet, provided that their much-needed power is around 12 to 24 volts, which is the same one used for the device itself.

The device is an amazing 13-port router that provides gigabit Ethernet with bypass capabilities, making this one of the best rack-mounted routers in the market. Some of the ports are part of the switch groups. For added protection, you can also encrypt the hardware.