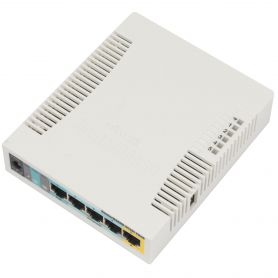 The RB951Ui-2HnD is a compact wireless networking device that is perfect for your small office or home office. It does not require a lot of premium space. Yet despite its size it is loaded with plenty of heavy features that can give other large access points a good run for their money.

The wireless networking AP comes with a brand-new core processing unit, namely, Atheros AR9344. This has more power and more speed, allowing the device to serve several devices and users with great ease simultaneously. The CPU is furthermore paired with a whopping 128MB DDR2 memory. It also includes a PoE injector which allows you to deliver the same kind of electrical power through the Eternet cable, saving you the hassle of dealing with multiple wires and cables in the process.

It currently operates on RouterOS L4 license, which includes 15 days of initial configuration customer support, unlimited EoIP tunnels and VLAN interfaces, 200 PPPoE and PPTP tunnels, 200 active hotspot users, and RADIUS Client. This can be upgraded to L6, which can then give you unlimited tunnels, hotspot active users, and VLAN interfaces. You can also take advantage of more than 20 days of customer support via e-mail.

The RB951Ui-2HnD possesses 5 Ethernet ports and a USB port, all of which let you build a reliable and robust network for your home or small office in no time. With them you can add other necessary peripherals such as printers or transfer large data files. The access point also comes with an integrated antenna with an output power of 1,000mW. Its great reach can therefore cover your entire home, even rooms that may be surrounded by barriers like walls.

For fast monitoring, there are 5 Ethernet LEDs that provide information on the real-time status of the device.

MikroTik hAP lite classic
(1)
QCA9531-BL3A-R CPU, 32MB RAM, 4x LAN ports, 802.11b/g/n, RouterOS L4
(1)
$ 19.31
From
Product review
jmj
Good!
Keila Nottley
Best router for home use you can buy for money. Awesome range and quality for low price. Highly recommended.
Hulk Chester
I had fiber optic cable installed and no other routers works but , this one was recommended and it works great
Greyson Clinton
So low price for that amazing device. I’ll never buy any other router. Easy to setup, excellent range of internet, price is just funny… Highly recommended.
Shawn_91
It is quick and simple to install for a default wireless router. Range of Wi Fi is brilliant. Customer service is perfect. Good stuff for good people – eurodk rules!
MarioBros
Amazing range, Gives you so much control over your network. Funny price.
Anthony W
Very pleased with this router. Most powerful router that I have ever had at home.
Steve Lampshire
It was recommended to me by my friend who uses it at home. Took it for our 5PC office. Works great. With increase of the business will go for the next level version from MKT.
Dwayne Tannant
Extremely powerful router for its price. I like that it have 3G dongle option. Requires some experience during configuration, but online manual solves all possible problems.
Russ Swan
Arrived on time and nicely packed. This router does exactly what it says on the website. Never seen any faults since it is connected. Quality product at an excellent price.
ALL PRICES EXCLUDING VAT