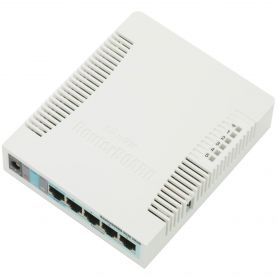 The RB951G is a drastic improvement from its predecessor. It’s more reliable and more efficient without paying more for the extras. Truly, it’s a great addition to your home or small office.

The access point has 5 fast Internet ports (Gigabit Ethernet) that makes sharing of media devices and hardware such as printer within the network a lot easier. You can also quickly build your small network as your home or small office-or business-grows. There’s also one USB 2.0 port, which you can use if you want to share content or need to transfer large files within the network. So you can properly keep track on the general status of your ports, as well as the entire access point, there are LED indicators found in the device.

The RB951G operates in 2.4GHz frequency, which is considered standard. Moreover, it connects via 802.11 b/g/n protocols. The built-in antennas feature 2x2 MIMO technology with a maximum gain of 2.5dBi and 1,000mW. In other words, you can cover your entire home, and definitely you can get a steady wireless Internet signal if you decide to work outside such as in the garden or backyard.

The access point has a more upgraded core processor known as Atheros AR9344. This one provides up to 600MHz of Internet speed, a far cry from the 400MHz of the previous model. The RAM has also been increased. Instead of 64MB, RB951G now has 128MB. To complement the fast processor, RB951G uses RouterOS L4 with up to 15 days of initial configuration support.

RB951G has a dimension of 113 by 138 by 29mm with a bare weight of 232 grams. It’s definitely small and compact and thus doesn’t take up a lot of space. It also blends very well with the rest of the hardware in your home or small office.

NanoStation M2
(6)
2.4GHz, 29.4x8x3cm, 11dBi antenna, AirOS, POE-RJ-45, 802.11b/g/n
(6)
$ 72.95
From
Product review
Madis
Excellent router, latency is very very good now!
Milo Mandler
That amazing device was delivered in promised time. Love eurodk online support and discount system. IMHO best market ever.
Eckart Eidman
I feel like I won a lottery!! I 've buy the best router for the money can get!!. Very reliable and robust device in the same price range, as typical consumer products, that do not perform nearly as well.
Filippo Sandercock
Outstanding device for little office and home use. You may need some decent networking experience (yeah it's not for noobs), but this one amazing piece of hi-tech supports a lot of routing protocols, Vlans, QoS et.c.
Tsuruki Leung
Love this one performance and diagnostic tools are great. Wireless performance and connectivity is brilliant. Friendly value and has proven for a quality (AA++).
Tamasine Iseri
I'm not a pro, but it takes too long to make it work. Too difficult make it run for a first time. Now works like a charm, but I am a bit afraid of it'
Gianbattista Speciale
Powerful basic device! I have configured this one with QoS without any issue, switching, bridge and the routes, the integration very simple (all in the web interface).
Angelo Tepedino
This is definitely for advanced networking users, more advanced than me, but I get by by reading the manual. The 'baby' is FAST and has much more features to configure than I know. The wireless signal is much stronger than I expected given the lack of external antennae, but it's at least as good as the DLink it replaced.
Caesare Casalino
Congratulations! You've found best quality router for the money. I believe this place you can get best price. ?
Shamus Wiedersheim
Amazing stuff for my home pc!! This is a great adapter. It can be used as a cheap alternative to buying a wifi router if you are willing to keep one computer on all the time. The software with this device allows it to work as an Access point or a wifi receiver. Also the included antenna is a 5dbi high gain antenna which will pick up a signal from much further away than your wifi antennas inside your laptop. Highly recommended!
Marve Shropshire
Outstanding quality for friendly price! Excellent and full featured router with outstanding performance and diagnostic tools. Wireless connectivity and performance is simply amazing. This is an incredible value and has proven to be very reliable.
ALL PRICES EXCLUDING VAT