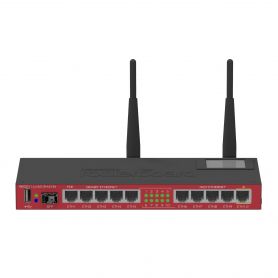 The RouterBoard 2011UiAS-2HnD-IN is considered the best among all the wireless routers produced by MikroTik. It’s a testament of the commitment of the company to provide you with nothing but the best wireless system, making sure that you won’t have any problem connecting online, creating networks, and sharing your Internet throughput to many devices and users. It isn’t the cheapest in the market, but it also guarantees excellent value for your money.

Building your own network is not difficult at all when you’re using the RouterBoard 2011UiAS-2HnD-IN. It has 5 LAN ports, microUSB port, and additional 5 ports with Gigabit Ethernet. In other words, you can include devices such as gaming consoles and HDTVs into the mix. You can also share devices such as printers and storage media. The wireless router also has an SFP port that is compatible to a couple of modules also provided by MikroTik. This doesn’t have any MiniPCI slot as well as a PoE support.

The RouterOS L5 is one of the recent wireless Internet service providers’ operating systems. You can keep operating system all throughout the life of the device, or if you can take advantage of more options, you can simply buy version 7.x and upgrade it. As a L5, you can get an excellent configuration support of up to 30 days. You can also support a wide variety of protocols such as RIP, BGP, as well as OSPF, and obtain unlimited EoIP and OVPN tunnels and VLAN interfaces. Tunnels such as PPTP, L2TP, and PPPoE have 500 allocations.

The RouterBoard 2011UiAS-2HnD-IN runs on Atheros AR9344 core processor with a CPU speed of 600MHz. This is then coupled with 128MB RAM and a built-in antenna with a gain of 4dbi and TX power of 30dBm, increasing the coverage without causing any latency.

MikroTik RB2011UiAS-RM
(10)
AR9344 CPU, 128MB RAM, 5xLAN + 5xGLAN, RouterOS Level5
(10)
$ 92.31
From
Product review
Omur Mahmoud
Too good to be true, but too diffuclt to get five stars. I've spend few hours before i 've run it first time (support is brilliant and i get a loto f new knowlegges), now it's run for a 6 days without any issue.
Ilgi Tozlu
Another brilliant device from (my favourite) MIKROTIK guys' only few words: after initial setup you will forget about it for a long time!!!!!
Kole Wickwire
This one has awesome ability: it can run virtual machines!!! The best for money you can get!!!! BUT!! Not for newbies.
Ruven Zunk
You need to spend a lot of time to read manual, or you cau use online support. Anyway it's really best router I've ever seen, only very difficult to set up.
Geoffrey Metz
I am sys admin and work for a 6 years. I've used a lot of hardware at my office, and finally I've find Mikrotik' Pure quality!! Finally found the router I was looking for, and price is very friendly.
Jo Ye
It doesn't have an option we need - a basic system in their GUI to do port forwarding.(I realize this unit is primarily used by and pros, but It would be a great router If it had) But as router it works good,( the only no easy to setup)
Tokaji Tagawa
Very pleased with this one. You will receive not only a great router board, but great tech support with it. A lot of information it internet about this one and live support on eurodk.com is brilliant. Now it works for a few weeks and we have NO problems with all our devices, phones..xbox.., tablets laptops. Highly recommend
Pericle Micale
I am happy, because I have one of these. It really good stuff, much better than Linksys, D-Link, Netgear etc routers that cost 30% more. Additionally, there is on-line support.
Agape Catucci
Could be complicated for noobs. For me it's powerful professional well madden router with a lot of option, maybe even to many' ?. Upon setup 6 weeks ago, it has worked like a charm. No complaints.
Adelphos Francone
Professional use only!! I've ordered that amazing hardware for awesome price with complexity as deep as it's feature set then purchase away! A lot of options and support is brilliant. Highly recommended AAA++
Shelia Paul
This is one of the better boxes for the value and functionality from a medium business too a small ISP though Im sure it can handle quit a bit more! Great Router, Enjoy!!!
Miranda Washington
Not easy to setup, but ... After weeks of struggling with arcane configuration issues on a competitive unit, got this one up in a day with no prior experience. Solid approach, intuitive software without 'silent' failures, and good thermal management. We'll be moving the rest of our network to Mikrotik equipment. AA++
Fannie Nichols
My super reliable and feature rich Snapgear was quickly closing in on it's end of life. I work from home and needed a router that could do an IPSec tunnel into my main office (easy) and a PPTP tunnel into another office (not so easy). I went through four different VPN routers before finding this one. I think this may be even more capable than the Snapgear and it's the cheapest VPN router I've found to date. I am super pleased with this purchase. As others have mentioned setup can be a bit daunting but once you get through it you're done. If you need a super quick easy setup you might want to look elsewhere but you will be missing out on a great router.
Joanna Bailey
Great router but comes with a design flaw
Lorraine Davidson
Much more options than you could want but complicated setup. Do not purchase if your not a tech savy individual with experience in network terminology. Upon setup - has worked flawlessly. No complaints.
ALL PRICES EXCLUDING VAT