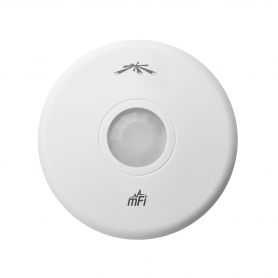 Would you like to make your life even more comfortable? Perhaps turn the light on as soon as you come home? You can now do it using various sensor systems from Ubiquiti such as a ceiling mount motion sensor.

The ceiling mount motion sensor has a wider coverage mainly because of its position. It has a total angle of view of 360 degrees and a cone of detection of 110 degrees in terms of wind angle.

The last thing you want to happen is to set off the wrong triggers or false detections. If the sensor, for example, is connected to a particular device, it may mean an appliance can end up running while wasting energy! To avoid this problem, the ceiling mount motion sensor makes use of not one but two types of motion technologies. One it has passive infrared, which means it doesn’t emit energy itself but only reacts to objects that do. This then eliminates the confusion experienced by the sensor. Second it is fitted with microwave detection wherein it reacts only to changes made by the moving object.

The entire system is plug and play, which means just attach all the needed components such as the Ethernet cable, and you’re good to go. There’s a special software that you have to use to give you more control over the device and the connected parts, but it won’t take you more than 30 minutes to have everything up and running smoothly. Moreover, the bundle includes a bracket to help secure the sensor up the ceiling.

You can connect the ceiling mount motion sensor to the IP network so you can access in a web-based system. You can also check, keep track, and modify the settings through mobile devices via great cloud support.

ToughCable Pro
(3)
Outdoor CAT5e industrial-grade shielded ethernet cable.
(3)
$ 117.85
From
Product review
Beverly Cox
The photocell feature caused me some trouble, as the users wanted the lights to come on, no matter what the ambient light level was. I finally had to tape the photocell over and it works fine now. Instructions on how to set it up were poor; tech support was available and helped some. Overall, the relay output switch was exactly what I needed to switch fluorescent lights. Testing it was time consuming, based on what the tech said I had to do; very confusing process.
ALL PRICES EXCLUDING VAT