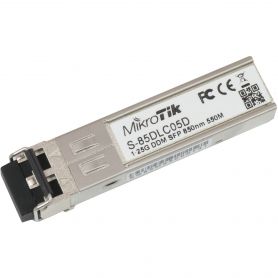 The SFP Transceiver 1.25G 850nm 550m works on a dual fiber, which is basically fiber optics that is composed of two strands that are different from each other, but they have the same wavelength. They can be joined or be made into a multi-mode fiber or one strand in order to increase the throughput and make the performance even more efficient. It also becomes bidirectional (BIDI) so it’s able work on either direction. A multi-mode fiber works on two wavelengths: 1550nm and 1310 nm. Regardless, fiber optics is always considered to be a better investment than other types of cables since it’s more reliable and flexible.

The SFP Transceiver 1.25G 850nm 550m has been designed to fit a number of SFP cages perfectly. In other words this transceiver can be easily added into any existing network, allowing it to take full advantage of the speed, agility, and performance of fiber optics.

It also comes with a Duplex LC connector, which is designed by Lucent Technologies (hence the name). It then looks like an RJ45 connector, but it’s basically a duplex connector that is both connected via clip. You can use this to attach the transceiver into the cage.

The SFP Transceiver 1.25G 850nm 550m has a low dissipation of power at less than 700mW. It also provides 1.25Gb/s of data links (dual) and comes with a 850nm FP transmitter of laser. The SFP Transceiver 1.25G 850nm 550m, moreover, is equipped with a metal enclosure that is able to bring the EMI down and a lone power supply that generates 3.3V. It has an operating temperature between 0 degrees Celsius and 70 degrees Celsius.

The SFP Transceiver 1.25G 850nm works up to 550m, which means within this distance the transmission of data remains stable or sustainable.