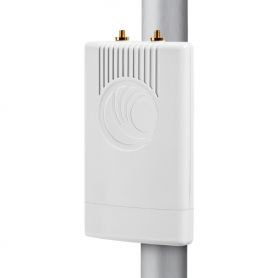 Note
The item was either used as a sample for demonstration or returned by a customer after few days of use. The item might have slight scratches but is not worn-out or heavily used. The device is fully functional. Also, the original packaging of the item might be damaged or, rarely, absent at all. All used units come with EU power plug if applicable or not specified otherwise. Warranty terms for used items are the same as for new items.
Description
ePMP has set the standard for high performance, scalability, and reliability in harsh interference environments all at a compelling price. ePMP 2000 is the next-generation Access Point bringing interference tolerance to a whole new level with unique Hypure™ technology, which combines Intelligent Filtering and Smart Beamforming to deliver new levels of performance in the face of interference.

Intelligent Filtering improves both receive and transmit performance. It protects the network from off-channel
interferers with a filter that dynamically moves around the channel. On the transmit side, it protects the RF
environment by reducing off-channel transmission noise.