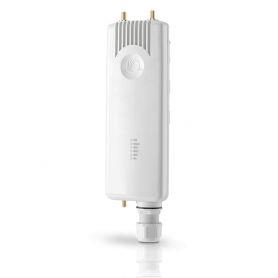 Cambium Networks’ ePMP product line has set the standard for high performance, scalability and reliability in harsh interference environments all at a compelling price. The ePMP 3000L is the third generation access point (AP) that carries on the interference tolerance mechanisms with an emphasis on high-performance in low-density point to multipoint sectors. The ePMP 3000L is a 2X2 MIMO connectorized access point that can support a wide variety of deployments including 90/120 degree sectors, narrow-sector horns or even 360 degree omni coverage. In addition, the ePMP 3000L continues interference mitigation techniques with support of TDD synchronization using GPS and the robust software from the ePMP product line. The ePMP 3000L AP system consists of the ePMP 3000L AP, an optional 2X2 sector antenna and a wide variety of subscriber modules with varying form factors and link budgets. The ePMP 3000L system boasts high packet per second performance, peak throughput of 600 Mbps and supports subscriber modules with up to 600 Mbps of peak throughput.

• MicroPOP Applications: ePMP 3000L is ideally suited for areas with low density or small numbers of subscribers. With support for narrow-band sectors and omnis, coverage can be added exactly where needed.