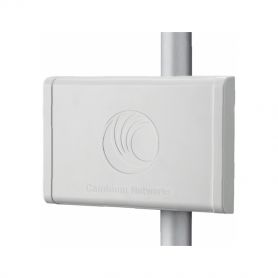 Note
The item was either used as a sample for demonstration or returned by a customer after few days of use. The item might have slight scratches but is not worn-out or heavily used. The device is fully functional. Also, the original packaging of the item might be damaged or, rarely, absent at all. All used units come with EU power plug if applicable or not specified otherwise. Warranty terms for used items are the same as for new items.
Description
ePMP has set the standard for high performance, scalability and reliability in harsh interference environments all at a compelling price. ePMP 2000 is the next generation Access Point bringing interference tolerance to a whole new level with unique HypureTM technology which combines Intelligent Filtering and Smart Beamforming to deliver new levels of performance in the face of interference. The ePMP 2000 System consists of a high performance, GPS Synchronized Access Point Radio with Intelligent Filtering, a new
compact high performance Sector Antenna and an optional Smart Antenna.

Intelligent Filtering improves both receive and transmit performance. It protects the network from off-channel interferers with a filter that dynamically moves around the channel. On the transmit side, it protects the RF environment by reducing off-channel transmission noise.

Smart Beamforming drastically reduces the effects of on-channel interference. The System learns the locations of each served Subscriber Module and forms a narrow beam towards the desired Subscriber Module while that radio is transmitting in the uplink. This reduces the gain on the uplink for on-channel interferers that are transmitting at an azimuth angle different than the Subscriber Module, delivering performance gains never before seen.
Specification
Downloads
Technical Specs / Datasheet - ePMP 2000 Smart Antenna
Frequently bought together