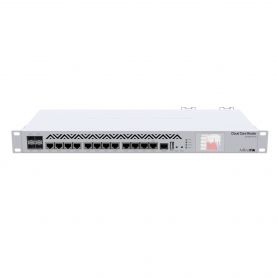 Whether you’re a hard-core gamer, a regular online media streamer, or an enterprise with a dream to grow, you need a router that makes creating and managing network setups a lot easier, more practical, and more efficient. You need a bigger memory, a more powerful processor, and a router that is flexible to your ever-changing network or wireless needs. CCR1036-12G-4S fits the bill for a lot of reasons. It boasts nothing but only some of the best vital components, from the ports down to the core processors, slots, and memory you surely wouldn’t ask for anything more. It’s definitely the epitome of industrial-grade wireless technology.

The CCR1036-12G-4S is able to perform way above other commercial-grade or enterprise-level routers and provide truly reliable and over-the-top wireless Internet speed and strength because of the parts that make it up. It currently runs on a 36-core processor with an astonishing speed of 1.2GHz for every core. That’s basically a millions of packets in each second. To top it off, it comes with a 4GB RAM, but since it’s fitted with the equally efficient RouterOS, you can easily upgrade this to 16GB or even higher. It also possesses 12MB of on-chip cache and makes use of the TILE GX architecture.

A Variety of Network Topologies

Networking devices with CCR1036-12G-4S has never been this easy and fast. The router is equipped with a dozen of Gigabit Ethernet ports, 4 SFP ports, 1 USB port, and serial console cable. All the Gigabit ports connect directly to the router’s CPU, allowing you to maximize the juices provided by the core processor.

RouterOS License L6 The CCR1036-12G-4S runs on the current RouterOS license, which is L6, making the router act as a controller as well. You can upgrade it to version 7.x without extra cost and enjoy unlimited support to different protocols, tunnels, interfaces, and queues, among others.

PSU Open Frame 12V 10.8A for CCR1036 series
12V 10.8A internal power supply for CCR1036 series
From
$ 30.03
Product review
Hartford
Only three words about this AWESOME hi tech router. It’s FASTER BETTER and STRONGER that anything you can get for money!
love it
This piece of hi – tech is awesome!!! Great performance for THAT low price – you’ll never find better
spider 77
Exactly what I was looking for. Best price / quality. Highly recommended, but only for professional use.
IT Prof
Best of professional routers I've ever use. You can pay twice more, and buy something like that, but you will never get THAT performance.
Bob Sandor
Using 10 CCR1036 in production. Everything runs smoothly. No complains about routing. Uptime is more than 2 months so far.
Wayne Paul
I want to change my HP ML150 to MKT CCR1036. Had a problem with SPF port, but it was fixed with the new firmware. Apart from SPF problems, it works without complaints. All testing comes back good.
Chris Wright
Bought 1 CCR for testing before the deployment. Planning to use it for BGP, Routing and Firewall. Had some problems with initial configuration. Few support tickets sent and answer provided in a few hours time. Planning to get 15 more for the production.
ALL PRICES EXCLUDING VAT