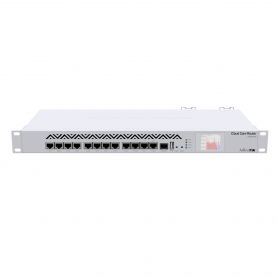 The wireless demands of an enterprise are very different from those of homes. For one, you need a commercial-grade router that is extremely flexible, scalable, and easy to configure and manage. You also need a wireless networking device that has an excellent range and a very high throughput that is capable of providing stable Internet connection across networks despite moderate to heavy Internet use, such as e-mailing, browsing, streaming, using VOIP telephony, and transferring large data. The Cloud Core Router 1016-12G isn’t the cheapest router out there, but its superior performance makes it one of the most sought after, trusted, and preferred by thousands of enterprise users all over the world.

One of the biggest advantages of Cloud Core Router 1016-12G is the myriad of networking schemes you can create. It possesses more than 12 Ethernet ports that are all Gigabit. Moreover, they are directly connected to the core processor, making them extremely fast and super efficient. It has 1 serial port and another for the microUSB. The enterprise-level router is bundled with a 1U rack mount case in case you want to upgrade your wireless network and add more connections in the future.

The Cloud Core Router 1016-12G is fitted with a 1.2GHz processor with 16 cores, making it absolutely snappy and responsive. It is also able to support a variety of devices that demand a considerable data transfer rate as well as sustain router and network applications with great ease. It is further paired with a 12MB on-chip cache, and 2GB RAM. It supports the TILE GX architecture.

Its efficiency is further boosted by its operating system, which is RouterOS Level 6. It is upgradable to version 7.x without extra cost. It offers unlimited number of tunnels such as OVPN, EoIP, L2TP, and PPTP. You can also configure unlimited number of interfaces for VLAN.

MikroTik Open Frame PSU 12V7A for CCR r2 Series
±48V Open frame Power supply with 12V 7A output, for CCR since revision r2
From
$ 38.93
Product review
Marsh Jaffar
Awesome device! True quality for a low price. A lot options, but not for home use.
Iosep Dipillo
Awesome device! So many options! Still learning with it, I have 2 camera systems ,2 dell severs ,4 laptops ,2 roko boxes ,3 cell phones running on it and use cox Business cable. Best thing I bought.
ALL PRICES EXCLUDING VAT