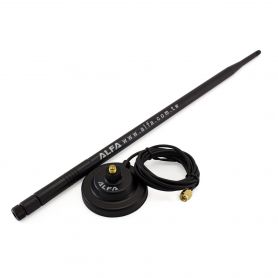 This is a 9 dBi gain rubber duck antenna for use with wireless adapters that have an RP-SMA connector on them. Many PCI and some USB adapters have this type of connector. Alfa models AWUS036H, AWUS036NH, AWUS051NH, and AWUS036NEH are all compatible with this antenna, as is any other Wi-Fi adapter with an RP-SMA connector.

With these antennas you may improve the power of the outgoing signal as well as enhance the receiver sensitivity for incoming signals. The improved signal gain and receiver sensitivity improve the reliability of any short-range communication, since the signal can be received solidly and clearly - no more time-consuming retransmissions because of faulty received signals.

These high-performance antennas are especially suited for the usage in wireless networks in companies and home applications. You will be able to provide remote and hard to reach locations with strong signals. Furthermore, the antennas are ideal for large areas like storage facilities, wireless hotspots and public spaces in general - everywhere you would like to enhance the range of your wireless network.

This unit is brand new in OEM factory packaging (non-retail). You will receive the antenna just as shown, exactly as pictured, along with the magnet base.