Operating System RouterOS has broad capabilities and easy usage, but recently they released "iron” routers under RouterOS control that can handle large amounts of traffic. The way out of this situation was simple - it was installed on a normal server, however there were compatibility issues with network cards and disk controllers, and the price is very high, especially if a large number of ports is required, not even dreaming about the optical slots.

Things have changed with the release of high-performance router Mikrotik CCR1036-12G-4S, there is no longer a need to assemble server yourself, to buy a license RouterOS or to worry about compatibility – it is now enough to just get the equipment out of the box and it is ready to work. Of course there is one drawback - stable version ROS 6th is not out yet, so some functionality may not work correctly. 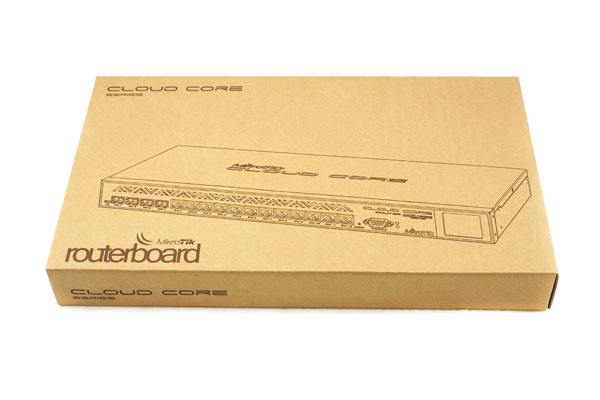 Router is supplied in a large flat cardboard box. 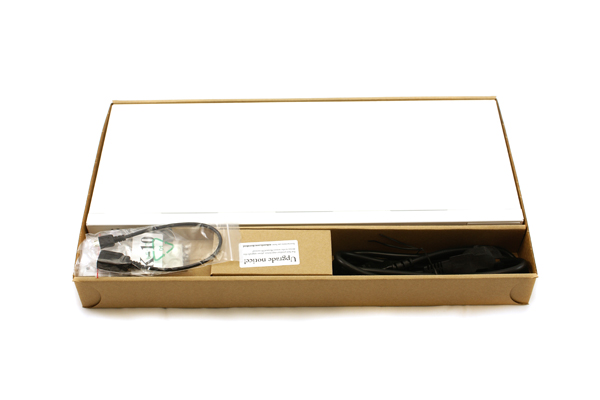 There is a Mikrotik CCR1036 and accessories inside. 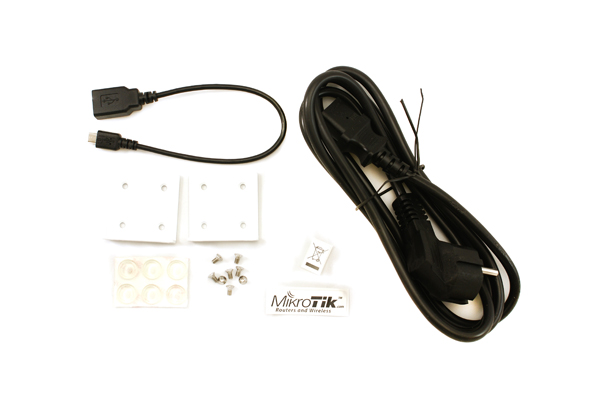 In the set there are power cord, “ears” for a fixing it on a stand, legs for placement on a table, labels, and Micro-USB adapter to a regular USB. 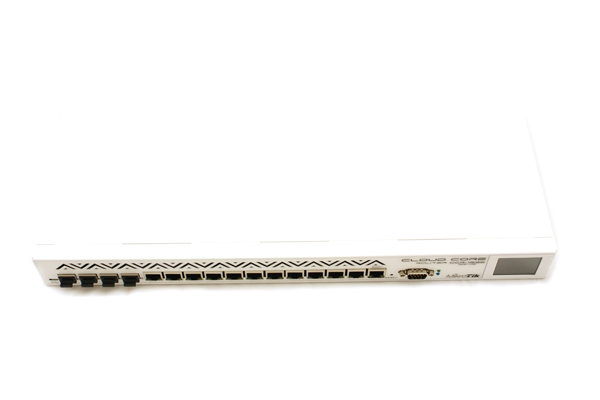 There are 4 slots for SFP optical modules, 12 Gigabit Ethernet ports, one console port and touch screen on the front side of the Mikrotik CCR1036-12G-4S. The reset button is located between the network and the console port. 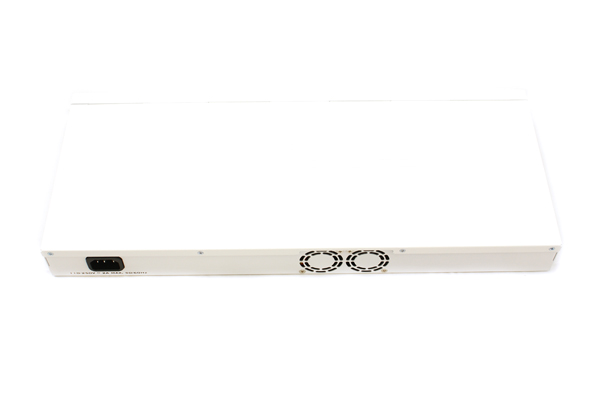 On the rear there is a connector for the power cable and 2 fans. 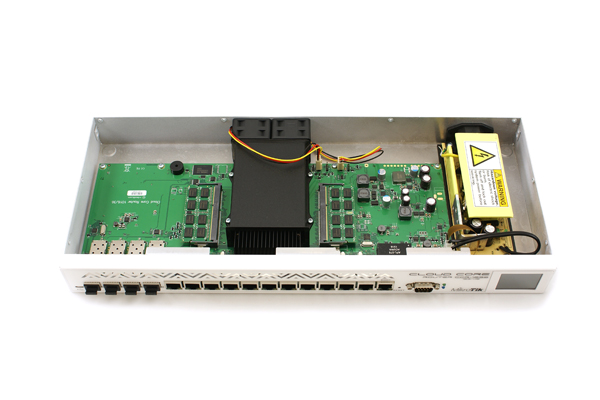 If you remove the cover from the CCR1036-12G-4S you can get to know all the internal content. There are two memory modules 2 gigabytes each located on the board, processor covered with plastic duct and two fans. Power supply is located on the right. 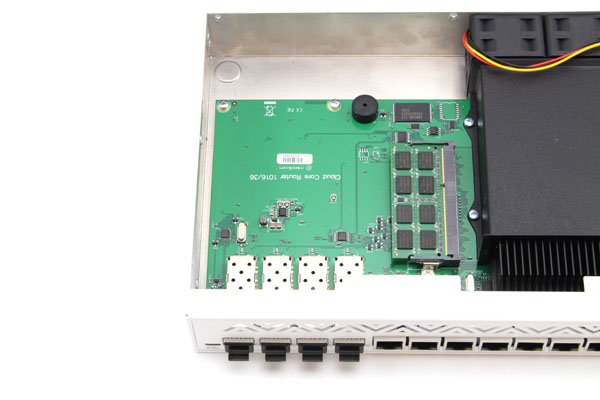 There are four optical ports and a beeper on the left. 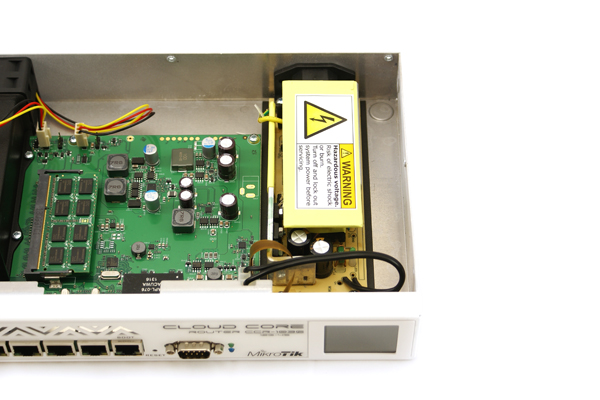 On the right side – power supply. 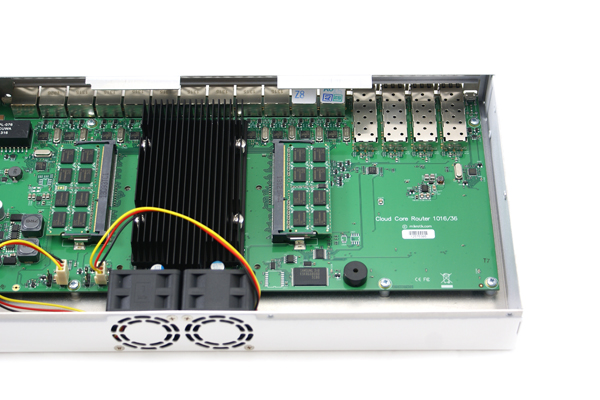 If you remove the air duct from the CPU of Mikrotik CCR1036-12G-4S you can see a massive radiator. 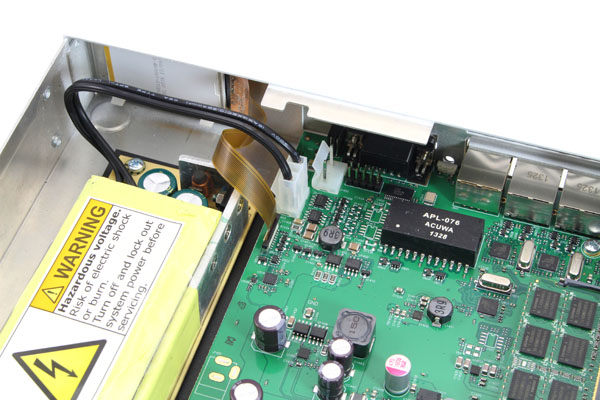 There are 2 connectors for the power supply located on the board Mikrotik CCR, it is probably made for the future, when there will be a model with a redundant power supply. 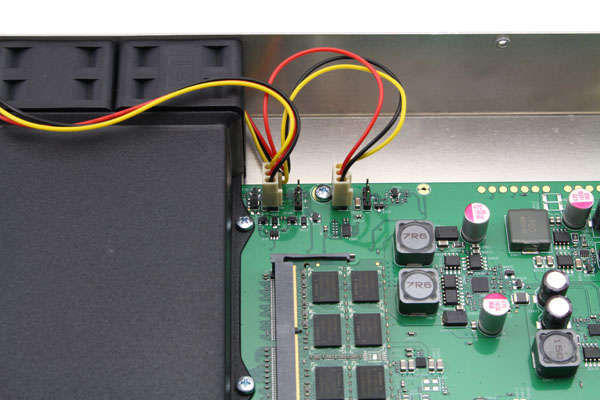 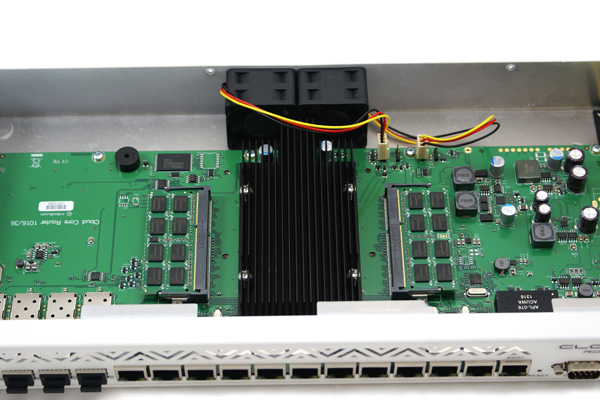 Both modules can be changed to increase the amount of RAM. Unlike other models, Mikrotik CCR1036-12G-4S allows you to expand the available memory up to 16 gigabytes.


Some things need be said about the fans, in the quiescent state they do not work, but once the load on the processor increases they make a sound as if two workers would be moving old grandmother’s wardrobe with not greased metal wheels. It is a good thing that they quickly unwound to operating speed and nasty sound disappears.


To test the performance you need to connect Mikrotik CCR1036 ports to each other and go to the router via winbox. 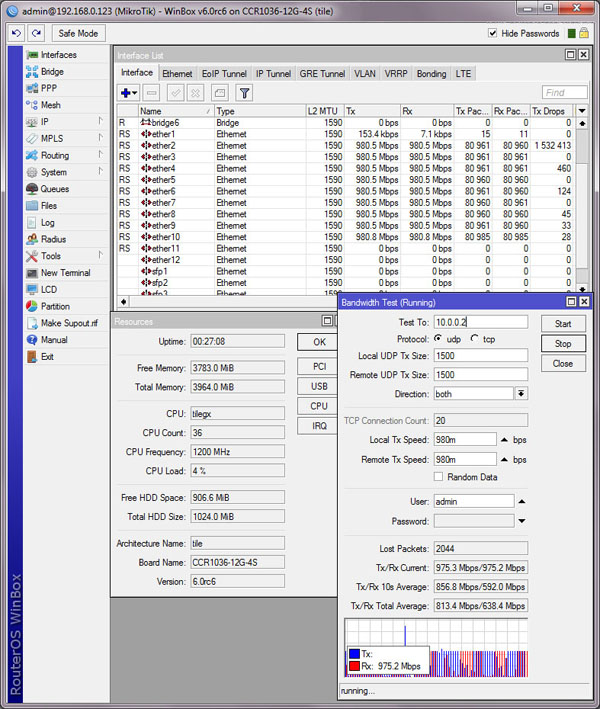 The new router transmits almost 18 gigabits of traffic through 9 ports in bridging, while the CPU is only 4 percent. 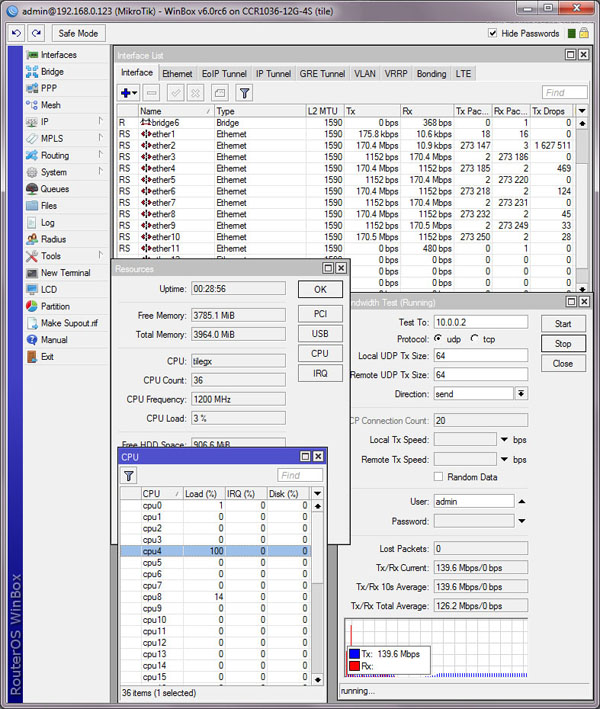 Test with 64 byte packets abuts the 100 percent load on a single processor, thus it passes 1500 megabits of traffic and 2.5 million packets through the router.

Duplex test packets of 64 bytes just lowers the rate of generation - 150 Mbps are passed in each direction, but the total for all ports it passes 2700 megabits and 4.5 million packages - not bad for such a small processor load. There is already a limit in the test; the router simply cannot issue more traffic, because one processor, which is engaged in the generation of traffic, is already loaded to 100 percent. 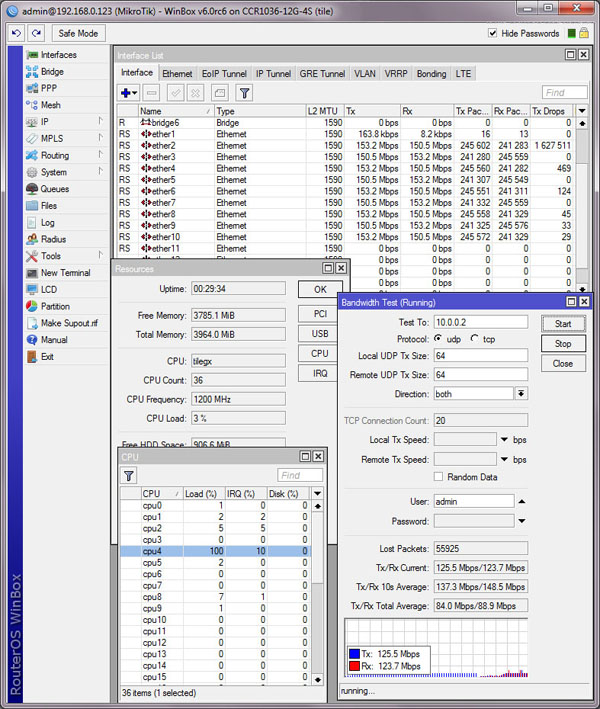 If the result is to increase 10 times, suggesting that a similar test is run in multiple threads, it is possible to get 27 gigabit bandwidth and 45 million packets. This is just enough to load all available network ports for almost 90 per cent. 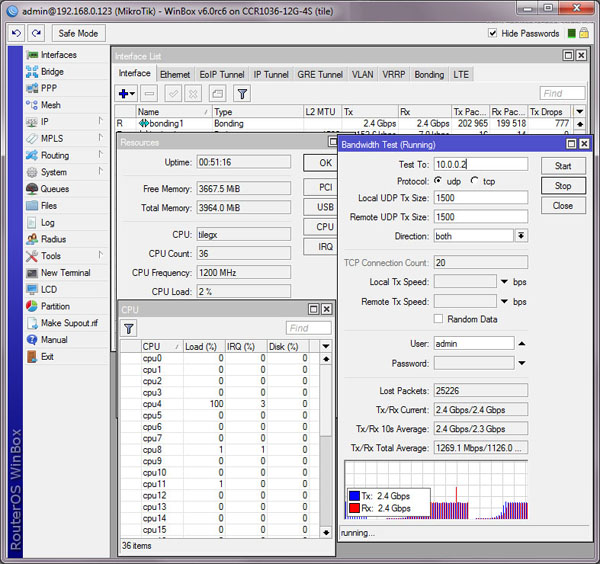 If you combine all ports bonding, the traffic generator does not produce more than 2.4 gigabits per second duplex. It all rests on the 100 percent load one processor again. 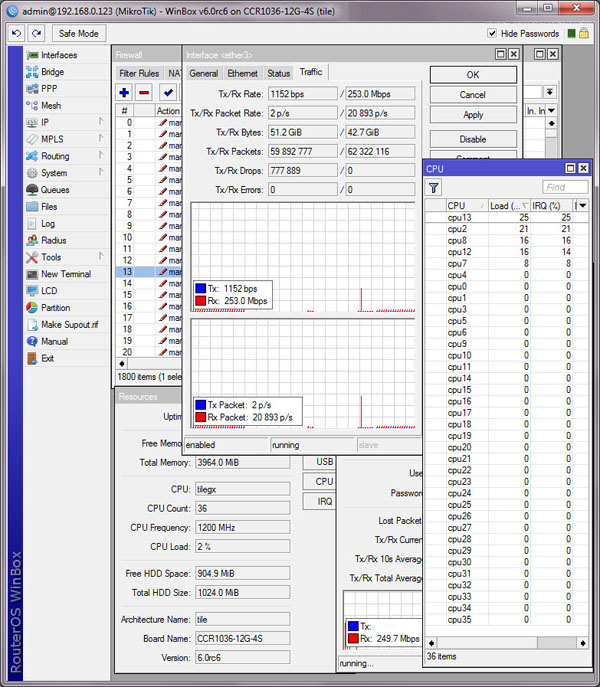 To download all 36 cores Mikrotik CCR1036 you have to add 1800 rules for marking packets, and there is an interesting picture - just run the test and it provides a stream of 250 megabits of traffic, while not rising above. 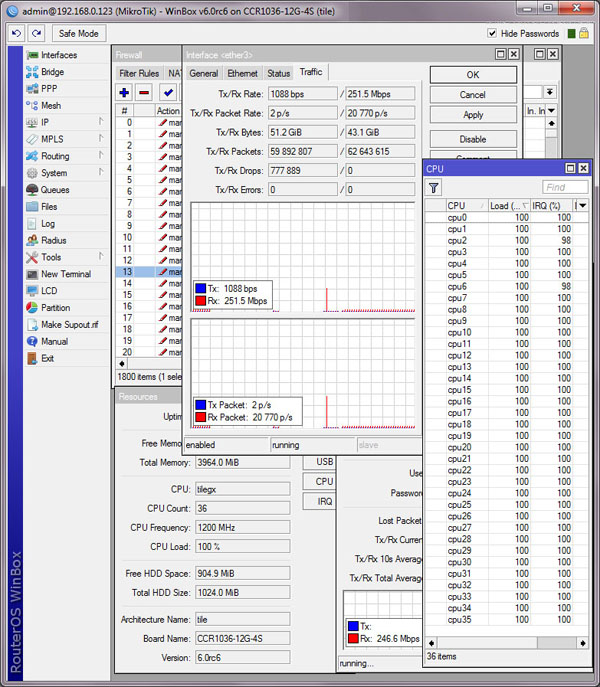 But after a few seconds, it can be seen from the peak of the graph on the previous screenshot that all 36 processors show the 100 percent load.

It turns out that mikrotik is blown away on 1800 rules, but it is quite a large number, at what each packet passes through the entire chain from beginning to end, in practice, such problems do not happen - it always comes out when gets on the right rule.

The test proved that it is not easy to load all processors in the real traffic; you can expect at least a 3 gigabit-through traffic and 4.5 million packets. Although it is very likely that the performance will be much better.

The new router Mikrotik CCR1036-12G-4S is not only for providers, but also various tasks, for example to connect remote offices - if you put it in the center, it has no problems to serve more than one hundred L2TP connections with the transmission routes in OSPF, performance will be restricted only by the speed of Internet connections.

Now the Mikrotik might successfully compete with CISCO - nobody can say that it has the lowest performance. Decisions on specialized processors gradually die off, and to replace them there come high performance multiprocessor solutions that can perform the same tasks with the same or even higher speed, while having several times lower costs.