New Products from Mikrotik in 2013

While Ubiquiti is trying to get at least a little bit closer to the routers from Mikrotik, releasing it’s EdgeRouter, that probably looks nice in the advertisements, and the price is so low that owners of other telecom brands start buying shares of companies that produce bakery equipment, Mikrotik company introduces base stations for outdoor performance, new boards and radio cards, as well as high-performance multi-port router with a touch screen, which can easily cast aside EdgeRouter PRO processors.

Manufacturers of aluminum case will soon have to develop a new compact model - the company has finally released Mikrotik board with modern integrated wireless adapter and miniPCI-e connector for installation as modern wireless radios in a compact design. 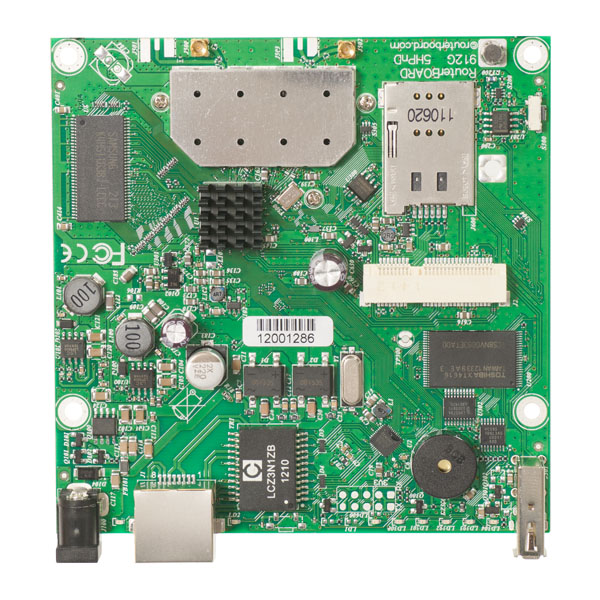 Mikrotik RB912UAG-5HPnD - board designed to build base stations with two radio interfaces in compact cases, integrated module operates in 802.11a/n MIMO 2x2 at a frequency of 5 GHz with a power of 1 watt. Mikrotik RB912UAG-2HPnD - the same, only the integrated wireless adapter 802.11b/g/n MIMO 2x2 clocked at 2GHz with a power of 1 watt. Connectors for antenna - MMCX. Near them there is a place on the board for the SMA connectors, so in the future you can expect such boards that you will not have to buy the pigtails for - therefore the loss of the radio link will be minimal. Network port is running at 1 gigabit. For installation of external radio card there is a slot miniPCI-e - wireless adapters R11E-2HND and R11-HPND, LTE adapters and any 3G radios fit in it perfectly. SIM card, if required, can be set in the appropriate slot on the motherboard.

It is also not a problem to connect it to a USB port if necessary - for the new board is not a problem, USB connector is available and you can also connect the second 3G adapter or third wireless adapter on Atheros chip. So it can be turned into a device with 3 radio interfaces.

It can be powered through the network port or power jack. Connector on the new boards for the power cable is made of metal, so now it does not come off even with rough handling.

This card can be installed in housing Mikrotik SEXTANT, and turned into a multifunctional wireless device with multiple air interfaces. 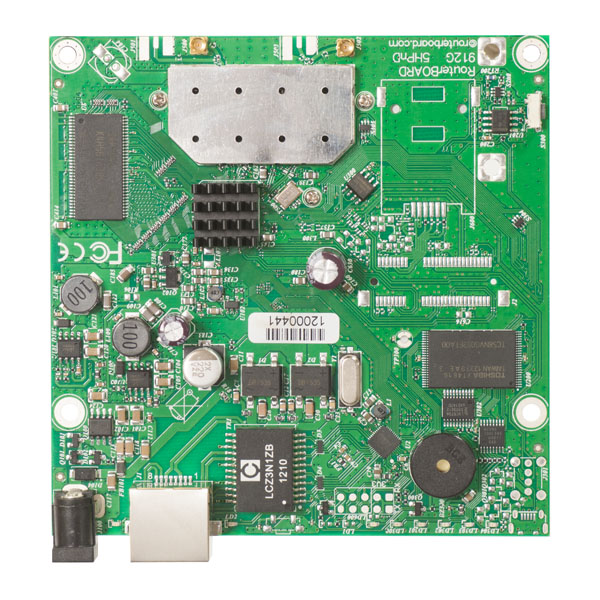 Mikrotik RB911G-5HPnD - board designed to build client devices, or as a substitute in a new SEXTANTG. Clocked at 5GHz mode 802.11a/n MIMO 2x2, power 1 watt. Some of the benefits are Gigabit Ethernet port and power jack.

Mikrotik RB911G-2HPnD - designed to operate at a frequency of 2 GHz mode 802.11b/g/n MIMO 2x2 to build the client devices. It has Gigabit Ethernet port with an iron screen and power jack on the card. 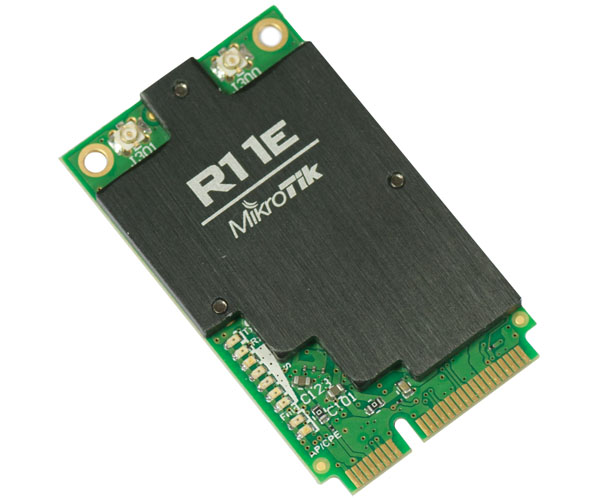 Mikrotik R11E-2HND - new wireless module standard 802.11b/g/n MIMO 2x2 for running at 2GHz with a power of 800 milliwatts with MMCX connectors for connecting antennas and miniPCI-e slot for installation in RouterBOARD. 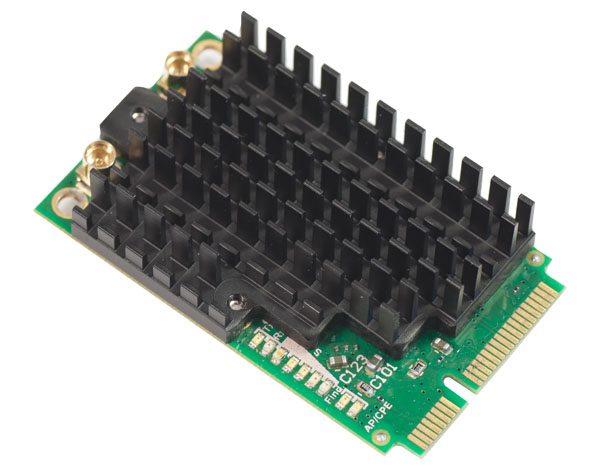 Mikrotik R11E-HPND - new wireless dual-band module standards 802.11a/b/g/n MIMO 2x2 to run at 2GHz or 5Ghz with a capacity of 1 watt with MMCX connectors for external antennas and a miniPCI-e slot for installation in RouterBOARD. There is a powerful radiator on the card to protect it from overheating.

Can be used by enthusiasts to build base stations based on components from the PC, or to install the 3G/LTE adapter in the server to create redundant links. The latter is often used when the servers are put in data centers, for some do not install the USB adapter to connect to the mobile operators, or they will not acquire the network due to poor antenna. When using RB14-EU server can be installed covertly inside any wireless equipment and connected to normal antenna, which also will be hidden inside the case.

There is also an opportunity for connection via Wi-Fi at a frequency of 5 GHz, with no need for an additional cable.

Mikrotik SEXTANTG 5HPnD - replacing an old device to a new one made on the basis of a new Mikrotik RB911 boards with integrated antenna 18dBm MIMO 2x2 and power of 1 watt. 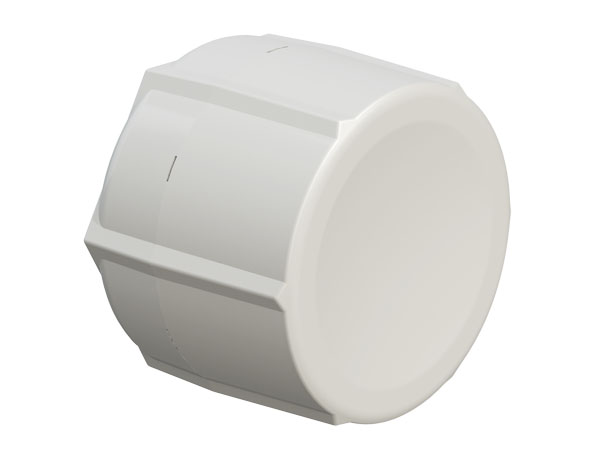 Mikrotik SXT HG - the same as the SXT, only with better antenna 17dBi with an option of installing additional boards and because of this the front cover had to lengthened (you can easily drink tea and coffee from it now as you would from a thermos), higher power - 1 watt, and Gigabit Ethernet port. Radio module’s operating mode in 802.11a/n MIMO 2x2 as before. 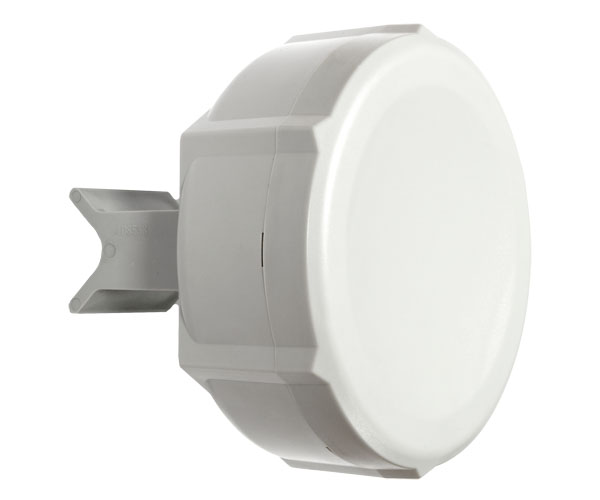 Mikrotik SXT SA - a revolutionary solution, the base station to operate at a frequency of 5 GHz with integrated sector antenna at 90 degrees. Wireless adapter operates in 802.11a/n MIMO 2x2, 1 watt power and Gigabit Ethernet port. Now it is enough to hang 4 these kind of the devices on the roof and you can supply clients with connection anywhere on the usual SXT Lite5 at distances up to 2.3 kilometers, SEXTANT to 4-5 kilometers or Groove with a directional antenna at large distances. You only need to look carefully at the name on the back of the device, so you wouldn’t put the customer as a base station by mistake =)

Mikrotik Groove 52HPn - device, which we lacked so much and that everyone will like, is now two bands! Can operate at a frequency of 2 GHz or 5GHz, built-in wireless adapter 802.11a/b/g/n MIMO 1x1. Issued separately L4 version with license to build base stations and L3 to connect with customers - now easily change the operating range without replacing the equipment, you just have to change the antenna. When using the new Groove 52HPn you should always remember what band antenna is connected to, in case of wrong choice and power the entire unit can burn down. 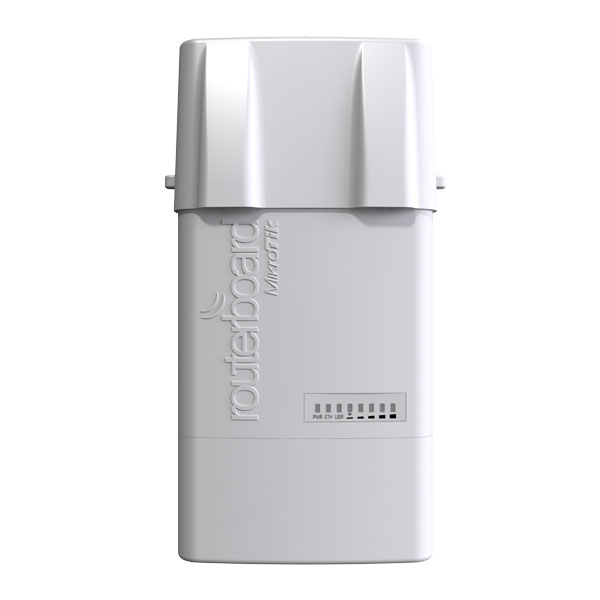 Mikrotik RB912UAG OUTDOOR - novelty, revolution, that nobody expected but then it came - analog to Ubiquiti Rocket M in a plastic case with SMA connector for external antenna. Clocked at 2GHz and 5GHz wireless adapter 802.11a/b/g/n MIMO 2x2, power 1 watt. At its base, you can make two range devices by installing additional radio card inside.

On the top there is a space to install additional connectors - the first two are located directly on the motherboard and there is no loss in connection pigtail, but places AUX0 AUX1 can be used to connect the antenna to the second radio. If you need more space for connectors, they can be drilled in any convenient location.

And where were Ubiquiti all this time, well what can we say?

Mikrotik CCR1036-8G-2S+ - another novelty, a router with two optical SFP + ports for 10-gigabit speed. Besides, there are eight copper gigabit ports, connector micro-USB, slot for memory cards and natural touch screen – wouldn’t be the same without it. Conventional processor, 36 core, 16 GB of memory, batch performance of 42 million packets per second which is no surprise - quite common for routers. 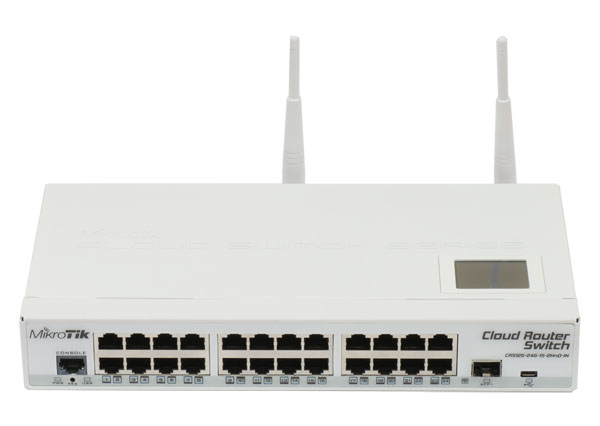 Mikrotik CRS125-24G-LS-2HnD-IN - issued to replace 24 port gigabit switches. There is a slot for SFP optical module, micro-USB port and an integrated wireless adapter. Touch screen is located in the most convenient location – on the top, will appreciate when installed.

These are all the news from Mikrotik. Not bad, right? Now we only have to wait when they are available, so we can really evaluate and make sure to select the correct line and network equipment manufacturer.